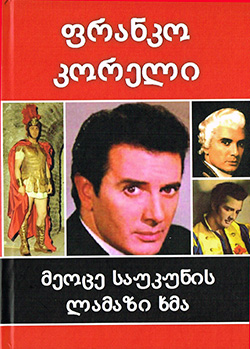 A Franco Corelli biography from Georgia, in the Georgian language (which looks like a mixture between old Mesopotamian and Arabic to me) is not your every day find. The author, Manana Homeriki, came relatively late to the splendors of Franco Corelli’s voice. Over the past years, she has corresponded with me off and on. Upon learning that I would be discussing her book, Homeriki asked me to add that she had a co-author, Tamar Tavshavadze, a musicologist consultant who kept an eye on the musical values.

As the plot summary below reveals, Homeriki is not your typical Corelli author like, say, Landini, Pugliese, or yours truly. Neither is she close to Buljegin or Bisogni, who from time to time wander into the realm of psychology, taking off down some surprising side roads. In a way, Homeriki is more in league with Stefan Zucker, who also writes from a very personal perspective, even though their perspectives are wildly different. Zucker was acquainted with Corelli, and he approaches Franco from the standpoints of vocal technique and sexuality. Homeriki never met Franco or saw his performances, and she explains Franco’s well publicized fears and trials from the gospel (chapter 5). I know that in the very secular West, the not particularly religious readers will frown upon this, but I found her honest, open and very emotional viewpoint most moving when we communicated about her book and its subject. I truly regret that I can’t read the actual words of these specific chapters, due to my lack of Georgian, but perhaps I will get some parts translated over the course of the year and present them here. Along with Giulietta Simionato and myself, Homeriki also seems to be one of the very few people on Earth who has any kind words for Franco’s late wife, Loretta Di Lelio. I was intrigued by the descriptive title of Chapter 8, “The Strange Corelli,” which deals with ‘the curiosities in his life,’ even though these surely cannot be exhaustive, but rather are probably just the well established ones. This seems to be a fantastic addition to the Georgian opera literature, and an exotic Corelli publication for those who can locate and be able to read a copy!

Admittedly, due to my not speaking Georgian, I cannot really ‘review’ the book as I did with all other Corelli publications here. Obviously, though, this is what we call “a fan book,” not only written, but also paid for and published by the author, whose admiration and love for Franco knows no bounderies. It has always amazed me how Corelli managed to draw people in to this extent, especially after his death. Homeriki, is an emotionally involved author and she herself provided me with a unique description of her prime research values: “The scope of my research was defined by my senses, through both sound and vision. When people express their emotions after hearing opera voices, I am sure that the human soul comprehends the complete musical gamma of sounds.”

On the book and her inspiration to write it, Homeriki told me:

“The great opera singers! I read their biographies because I was interested also in their private lives, the persons behind the music. What kind of people they were? What human values did they have. Unearthing those qualities made their personalities more attractive to me. Since the Georgian fans of Corelli are largely people of advanced age, most of whom do not speak foreign languages and therefore cannot read the existing English and Italian language books, we decided to make one for them about the great Franco Corelli in the Georgian language. Our book revisits the previously written ones – Franco Corelli: Un Uomo, Una Voce by Marina Boagno, Franco Corelli Prince of Tenors by yourself, Prince in Wonderland by Aleksei Buligin, and Franco Corelli L’Uomo, la Voce, l’Arte by Giancarlo Landini. To the book are added interviews of Giancarlo Landini and of Stefan Zucker with Corelli, newspaper interviews, memories of people who knew Franco, including his students, and also one of the competitors of the Franco Corelli Vocal Competition. We tried to explain the enigmatic personality of the singer, to talk about his joys and sorrows, of his brilliant performances at the opera houses of the world, his relationships with his colleagues, and about the love of his fans for their idol. "Franco Corelli the most beautiful voice of 20th century" was dedicated to the 90th anniversary of the birth of a great tenor. This book is our humble gift out of gratitude to the great singer, who gave so much joy to people.”

1.    Foreword by Gianluca Marciano – Chief Conductor of Tbilisi Opera and Ballet Theatre
2.    Introduction – Homeriki’s motivation to write this book (A. Franco Corelli was not popular among the Georgian music community, unlike Mario del Monaco, Beniamino Gigli, Enrico Caruso and some others.  B. I have been listening to opera since my childhood. I knew Callas, Tucci, Simionato, Tebaldi, Galli-Curci, Caruso, Ruffo, Gigli, Schipa, Del Monaco, Di Stefano but not Corelli. Many of my friends also didn’t know of Franco Corelli. I heard his voice very late. It was so charming and thrilling that I began to read about him. After reading of G. Pugliese’s article “Franco Corelli” I was so surprised that Corelli - very popular, extremely intelligent and professional, as well as a fine actor, a handsomest man and the idol of thousands of women, wasn’t arrogant but rather was modest and shy (in fact, he seemed to be embarrassed by praise from his colleagues). That shocked me. I was reading more and more about him and then wanted to tell everybody who Corelli was as a person.
3.    Chapter 1 – “In the beginning there was a song, a polyphonic chant” - An overview of singing itself (by Giacomo Lauri-Volpi, Tito Gobbi, Jerome Hines and others)
4.    Chapter 2 – Family (briefly about Remo, Adria, Bibi, Liliana and the first 30 years of Franco’s life)
5.     Chapter 3 – Beginning the journey (about Corelli’s first steps onstage. of Corelli. The competitions in Florence and Spoleto);
6.    Chapter 4 – The heavy cross of a singer (about Franco’s hard work to improve his voice, the statements of critics. My opinion to explain his fears based upon the Gospel)
7.     Chapter 5 - L’unica donna della sua vita (about Loretta Di Lelio, I respect her and presented her only positively).
8.    Chapter 6 – The opera roles of Franco Corelli in: Carmen, Norma, Aida, Don Carlo, Tosca, Il Trovatore, Turandot, Andrea Chenier, La Boheme, Les Huguenots, La Forza del Destino
9.     Chapter 7 - The lessons of a Great Maestro (about Giacomo Lauri-Volpi and his relationship with Franco in Burjasot) Werther , Poliuto;
10.     Chapter 8 – The „strange“ Corelli (about curiosities connected with Franco);
11.     Chapter 9 – Rudolf Bing – “Rodolfo” (about Bing’s relationship with Franco according to his memoirs);
12.     Chapter 10 - When there is such love (about Franco’s admirers and their love for to Franco)
13.     Chapter 11 - Franco Corelli’s great “Regret“ – Otello (why he didn’t sing Otello onstage);
14.    Chapter 12 – Singing along the continents (East Asian tour) Japan and Korea, 1971Japan and Philippines, 1973, Mexico, 1974. 17.05, Non-arrival in the Soviet Union;
15.    Chapter 13 – Baritone Ettore Bastianini (1922-1967) (Franco about Bastianini, his caring for the sick Ettore)
16.     Chapter 14 – Corelli and his leading ladies Maria Callas, Renata Tebaldi, Birgit Nilsson, Giulietta Simionato;
17.     Chapter 15 – The colleagues speak about Corelli;
18.     Chapter 16 – Si! E Finita (The last years of Franco’s life and death);
19.    Filmography;
20.     Repertoire of Franco Corelli;
21.     References.

If a Corelli biography in Georgian may come as a surprise, Homeriki stresses that Georgia is a very musical, opera loving country. It brought forth the oldest polyphonic songs, and great Georgian singers such as Vano Sarajishvili and Philimon Koridze were singing in La Scala at the end of the 19th century. Homeriki: “The first opera performance in Tbilisi was on September 20, 1845. On November 9, 1851 the first theatrical season was opened in Tbilisi opera house with Lucia di Lammermoor. In 1911,  Titta Ruffo sang there, and many great opera singers followed him there. Today, many contemporary Georgian singers are world famous: Paata Burchuladze (basso), Nino Machaidze (soprano), Anita Rachvelishvili (mezzo-soprano), Lado Athaneli (baritone), and Ketevan Kemoklidze (mezzo-soprano).”