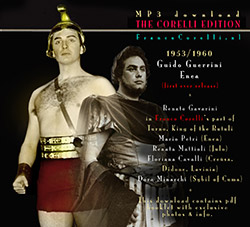 As a tribute to Franco's birthday, April 8, 2014 we proudly present the second of a series of special downloads that we have been preparing over the last year.

We celebrate Franco's birthday with the 2CD length MP3 Download of Guido Guerrini's opera Enea, which was created by Franco Corelli on March 11, 1953. Unfortunately, no recordings of the World Premiere performances ever surfaced, but as mentioned in Franco Corelli Prince of Tenors there is at least a chance to sample the music as such, through a later radio broadcast that dates back to 1960.

This recording has Renato Gavarini in  Corelli's role of King Turno of the Rutuli, the original inhabitants of the Lavinium region where Eneas landed after fleeing Troy. Turno challenges Lavinia's choice for Enea, which culminates in en epic movie style duel. Corelli's second role creation in the opera, as Voice of orfeo, was regrettably cut from the 1960 performance, but we have added the duet between Orfeo and Euridice as a bonus on disc one, taken from the performance by Tiemin Wang and Vera Ramer at the Prince of Tenors book presentation in Amsterdam, 2008.

What can you expect of this download? To begin with there is 32 page PDF booklet included, that comes with a very detailed English language plot summary. This summary  follows the tracking and indicates all important solos, chrosuses, duets and so on. Thus you will be able to follow the opera without any problems, even if you don't speak Italian. In addition, there is an introduction to the work, a biography of Guido Guerrini, an evaluation of the opera and some thoughts on Corelli's rendition of Orfeo and Turno. I wrote the basis for the booklet text in the wake of writing Prince of Tenors and  Franco Corelli The Legacy. The download is available here 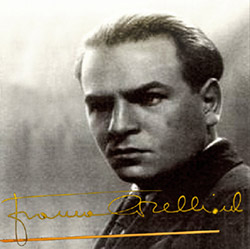 As for the music, the cast is headed by the mellifluous bass Mario Petri. In the principal role of the protagonist Enea, he is both vocally and physically a towering giant. Around him is a stellar cast of the best that Italy had to offer outside the internationally famous top 10. Important from our perspective was of ourse Renato Gavarini's portrayal of King Turno of the Rutuli. He arrives to the scene only in Act III, but he is very successful in getting across Turno's agitated state over the threatening loss of Lavinia to Enea. The duel between Turno and Enea is set in an epic movie style that is reminiscent of such spectaculars as as Blasetti's 1860 (1934) and Carmine Gallone's Scipio Africanus: The Defeat of Hannibal (1937), to mention but the most famous ones. Among the ladies, Floriana Cavalli stands out in the tripple roles of Creùsa, Didone and Lavinia, alhough the greatest impact is made by the fierce mezzo soprano Dora Minarchi as the Sybil of Cuma.

The plot starts with the Trojans fleeing the pillaging Greeks in Troy. The first act ends with Creùsa's prophecy 'Doce mio sposo,'  in which she urges her husband Enea to sail to where the Tiber flows in the sea; there Enea will find his true destiny in the creation of a new nation! The second act may have inspired librettist Adolfo Angeli to label the opera a 'Mito in tre atti.' The act opens with a scene of fauns and dryads, welcoming Enea's arrival in Cuma, near Napoli. When Enea enters the Elysian Fields, the music aquires an appealing, Tarzan movie-like atmosphere. With Orfeo's 'Hymn to Apollo' regrettably cut, the recording picks up from the 'Hymn of the fallen Heroes,' after which Enea meets Didone. Hardly a few minutes into their amorous chatter, the Queen of Carthago starts her famous compliants against our defiant hero, whose only wish is to leave her for Italy! The third act starts with the Trojans at the setllement that is known today as Lavinium, named so after Lavinia, the local beauty that has captivated the heart of Enea. Apart from the Trojan leader, she is also desired by the local King of the Rutuli, Turno. When she rejects him once again, he enters in a dispute with Enea, which ultimately leads to a gripping, Hollywood style duel in whcih Turno falls. With the toad clear to unite the nations under his government, Enea sings wise words about the prospering nation that will rise from the soils of the newfounded city, which he names Lavinium.

Fascinating in Angeli's text is the psychological make-up of Enea, whose casting with a bass voice is inspired by the fact that Angli envisioned him as a philosopher King rather than as a warrior. This required significant flexibility from the audiences then and now, but once accepted, it is at lleast an original concept. In the World Premiere, with the first lyric, then dramatic (in the Hymn to Apoolo) tenor part of Orfeo, there was still some balance in terms of distribution. That balance was unfortunately disturbed by cutting Orfeo's part from the 1960 performance. What remains is an intriguing attempt to reinvent opera not on the avant garde lines of the simultaneously composed Dallapiccola opera Il progioniero, but by uniting classical opera idioms from the antiques to Gluck with Italian epic film music of the late 1930's and 40's. Although the oper was butchered in the press, starting with the 'static libretto,' such imaginative mythical approaches became quite fashionable decades later (think of Henze's Bassarids). For those of you who are not prejudiced, and for those of you who once enjoyed such movies as Tarzan and the Amazons, Tarzan and the Leopard Woman, or Tarzan and the Mermaids, there will be many fantastic moments in Guerrini's Enea!

'An Ardent Lesson' comes with an elaborate, 34 page pdf booklet. The booklet is beautifully designed and loaded with high quality photographs, all digitally remastered by experts at my web design company, 401www. It features interview excerpts intended for Franco Corelli The Legacy, among these the unique memoires of Carlo Federico Scaravelli. The latter was the pupil of Melocchi who, in the late 1940's, passed Melocchi's lessons on to Corelli. There are reminiscences of Del Monaco of Melocchi, and of course the essential biographical information regarding Melocchi that hitherto was unfindable. His birth and death dates, photographs, and a survey of his unique career at the Pesaro Conservatory, where he started teaching as early as 1912 !!

A detailed tracking with samples you can find here

The Ardente pages you can find here

WHY NOT A CD ISSUE?

A little over 2 years ago we have inventorized the wishes of our members regarding CD–issues versus downloads. We had stated that we needed either substantial donations (around $ 5000 per issue) to produce high quality cd issues with the sort of booklets we envision. We needed 200 advance order copies for such an issue and received interest for about 10%  of the needed number. In short, interest fell far short of what was needed. Selling, however,  is not our prime objective. Maintaining the website and funding research is. We sell these downloads at modest price of 12 euros for a two cd set with a truly elaborate, well researched booklet, for which I’ve traveled as far as Rome. We hope that at least some of you will enjoy the effort.

Some recordings that we will offer in the future may have been previously released, either in part or complete. However, as some esteemed fellow labels – we mention among others Divina Records and Marson Records – we intend to offer only the best in line with elaborate documentation. We will not offer mere MP3 downloads on the Amazon basis (without booklets and artwork). Basically, we aren't so much offering MP3 downloads, but rather are we offering the booklets. We consider the music as a free bonus to the text rather than as the key element in the offer. It might well be that Franco Corelli The Legacy will eventually be released as a stand alone digital book with the audio inside the text. Technically nothing stops us from doing that except for the time it would take to complete it. If it was the legacy of Beyoncé I would immediately do it in that way, but reality abides us to take not of the fact that the fanbase of old school tenors like Franco Corelli, is not exactly identical with the i-pad generation. Most of us still treasure the vinyl pressings against the bling-bling of the cd-era, and we value box cover art work, and booklets. Lets just say that FrancoCorelli.nl will try to take our love for those things to the 21st Century with our downloads.

Please don't be surprised by the name of the download area, which is 401Sales.com. We are too small to maintain low key web shops with secure checkout and PayPal implementation for our four niche websites – apart from FrancoCorelli.nl, there is also one on Dutch Operas, one on Dutch Singers, and one on Jacques Brel. Jacques who? Well… Brel was perhaps not on a par with Corelli in terms of operatic singing, but… the do have something in common: both were born on April 8! It is truly pure chance, but I indeed wrote the biographies of the only two internationally renowned people born on April 8.